To be clear, The Walking Dead season 7 was a bunkum sandwich: book-ended by great episodes, the middle 14 limped along like a moribund zombie. With characters behaving with little semblance of developed motivation, we were also stuck for weeks at a time with supporting players doing nothing much at all. And then there was that CGI deer…

However, last night’s season finale was an absolute doozey. Easily the best episode of the season – heck, I’m calling it: one the best episodes in TWD history – there was so much to enjoy. So here are 7 reasons why it freaking rocked, and why we should be (tentatively) hopeful for season 8…

Ok, I know what you’re thinking. This isn’t an iconic “moment” we can all high-five over. But it is something we should be very excited about.

For waaaaay too long TWD has adopted a “one character, one episode” approach, meaning that generally each week we doggedly stick to a single character. This creates the issue of spending too long with bit players in an increasingly large ensemble, with main characters like Rick, Michonne and Darryl getting far too little screen time. It can also be interminably dull, with little sense of pace or momentum. At times s7 was literally like watching a man-munching ghoul wander mindlessly through some narrative nether-woods in search of brains (or preferable, a plot).

All this swapped up a gear with the season finale. Regular helmer and gore guru Greg Nicotero handled the episode with directorial panache and confidence, cutting back and forth between the Saviours, the Alexandrians and Hilltop. It built parallels, scope and a sense of things inexorably building to a head. Here’s hoping TWD adopts this style from here on out, and s8 doesn’t see a relapse to their more standard formula.

The cross-cutting horizontally between different characters wasn’t all: the episode also cross-cut vertically, to different time periods. A thrilling device employed famously in Lost (with its flash-backs and forwards), Nicotero deployed it here to devastating effect.

We open with Sasha falling asleep (we assume, rightly, after taking Eugene’s kill pill), but then flashback to a new scene situated at the end of s6 with her speaking with dead love Abraham. As well as being wonderful to see to jolly ginger giant back on our screens, it also added layers of pathos to his death and Sasha’s impending sacrifice. And if that wasn’t enough, we also had surreal, imagined imagery of Sasha and Maggie sitting down, watching a sun rise (the episode is called “The First Day of the Rest of Your Life”, and these two women are at a cross-roads: one has given her life so the other can restart hers).

These two stylistic choices – cross-cuts and time-shifts – were thrilling, disorientating and created great emotional beats. They were also both used to similarly powerful effect in the controversial series opener. Again, here’s hoping showrunner Scott Gimple takes note of how effective these narrative devices are, and how bland the show’s normal structure is in comparison.

Now we’re getting into it. The first moment of buttock-clenching tension was when Eugene volunteered to try and talk Rick down at Alexandria’s gates. As Rosita prepares to blow the Saviours the kingdom come, there is a flicker of conflict in Rick’s face when he sees Eugene outside, now a bonafide traitor. “Where’s Negan?” asks Rick, trying to desperately avoid killing his former friend. “I am Negan,” comes Eugene’s cold reply. Ouch.

It’s a moment that would have sealed Eugene’s fate (and may still do so in a future episode), had it not been for Jadis’ treachery in disarming the explosives…

The power of this final episode lay in the connection between character decisions that, you know, made sense, and the explosive action in the second half. And the character that arguably drove it all was Sasha.

Riding in the Saviour’s coffin, pretending to be their pawn in getting Alexandria to fall, she quietly, gently commits suicide in order to save her friends. Again, stylistically, this is shot beautifully: an extreme close up on her face illuminated in the dark as she mentally relives her last one-to-one with Abraham, whom she hopes to be reunited with soon.

By the time the Saviours have arrived at Alexandria Sasha is dead and has turned, so when Negan opens the coffin her undead self springs forth and gives her friends the distraction they need to fight back.

The episode, and Sasha’s arc, ends on a beautiful beat. Once the gun smoke has cleared and the Saviours have been repelled, Sasha’s friends go looking for her. And when Jesus and Maggie find her wandering in the woods, Jesus pulls her down out of shot and Maggie tearfully lays Sasha to rest. There was not a dry eye in the house.

You don’t have to be a brain surgeon to see the clear parallelism between the opening and closing episodes of s.7: both centre on an image of Rick, kneeling in the dust, whilst Negan jauntily taunts that he will bash the brains out of someone he loves.

This time round it’s Carl, but whilst the deaths of Glenn and Abraham in episode 1 utterly unmanned and psychologically broke Rick (a stellar piece of acting I don’t think Andrew Lincoln gets enough credit for), here we see the cold hard steel of Rick’s soul refuse to waver. Tears rolling down his face, he leans forward to Negan and repeats his threat from the season opener: “I told you already. I’m going to kill you. All of you…You’re all already dead”.

Rick Grimes is back, people, and with him let’s hope the show’s mojo and sense of danger. 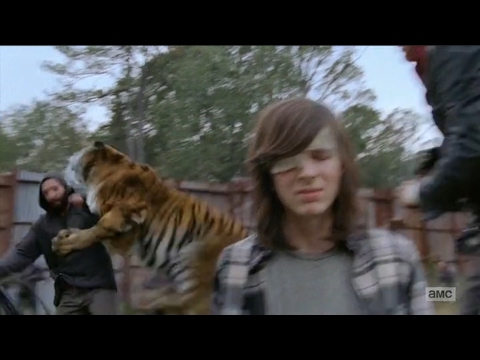 Earlier on in the episode we saw King Ezekiel and his regiment walking tiger Shiva through the streets, and you just knew things we gonna get, er, wild (sorry). And that promise did not disappoint.

As Negan looks to kill Carl in “one nice hard swing”, Shiva leaps through the background and starts lunching on a Saviour’s face. And as Ezekiel and Maggie storm in with bullets raining down, it’s the turning point where the different communities unite.

If we were sceptical about the presence of a tiger in TWD universe initially, the sheer awesomeness of this scene put those critics to paid. Still, how does Shiva know which people are the bad guys…

Ending on a more subtle note, and cross-cut with Sasha’s funeral, we see Ezekiel, Rick and Maggie – the leaders of the three communities – rallying their people. As Maggie – in many ways the most competent leader of them all – delivers her speech, the camera pans down. She’s holding her father’s watch, which he gifted to Glenn, and which she still holds close. And as her voice over recalls, this group exists only because Glenn saved Rick all the way back in season 1. It’s a wonderful, low key moment, and one which reminds us that TWD isn’t really about zombies, or violence, or the end of the world: it’s about family, and navigating the darkest of times together.

I should point out for balance that there were still some niggles. Ezekiel’s medieval speeches got old months ago, especially after he confided in Carol he just affects it to inspire people. Similarly I don’t buy the faux-Mad Max meter of Jadis’ dialogue either (judging by Judith Grimes’ age, the world only ended approx. 2-3 years ago, not long enough for her and her gang to go full post-apocalyptic in their lexicon, especially when others haven’t). And, it’s worth saying, Jeffery Dean Morgan’s Negan is definitely less threatening than he was in episode 1: with his chip-munk cheeks and endless, incessant banter, his character needs a serious reworking to up the menace and down-play the camp.

But overall, despite following one of the worst TWD seasons yet, this episode was a triumph. Here’s hoping that Gimple et al keep this momentum going, and push the show forward into new territory.