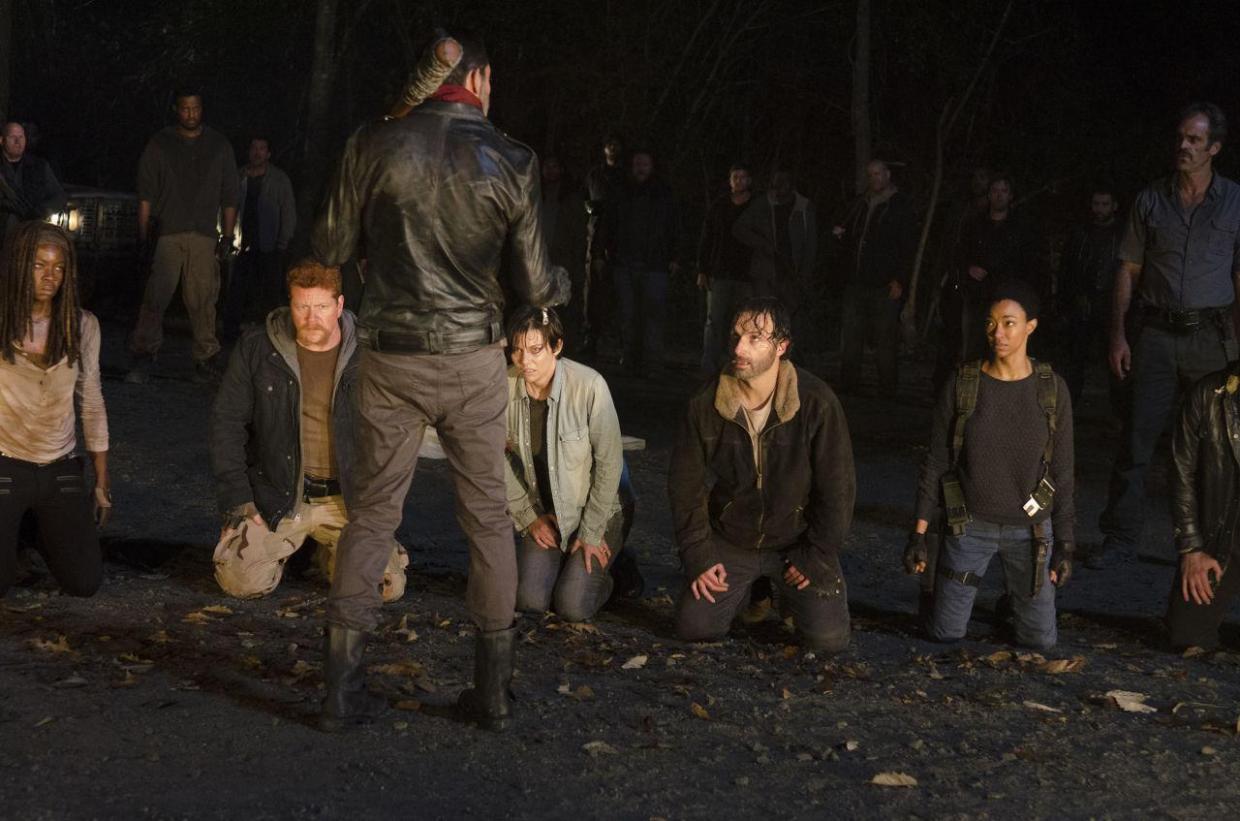 Just when you thought the apocalypse couldn’t get any more grueling, Season 6 of The Walking Dead left our protagonists kneeling in the dust in front of homicidal gang leader Negan. With his barbed wire baseball bat he promised “You are so gonna regret crossing me in a few minutes…” and in the Season 7 premiere, screening last night in the UK, he finally made good on his word.

It was always known that Negan killed at least one of the group, with the final shots of Season 6 being a bloodied POV as someone got the “holy hell” beaten out of them. But the episode delivered a sucker punch with Negan dispatching both Abraham and Glenn.

Now I’ve got no problem with TWD delivering hard-hitting content, but on this episode I think the show-runners made a tonal misstep: not in what happened, but in how it was shot.

First off, this was always going to be an emotional episode. One of the real strengths of TWD is its theme of family: this group of survivors have a bond that transcends friendship or mere reciprocity in order to survive. They genuinely care for each other, and invite the audience into that fold. And with the majority of these execution scenes shot with low angles looking up at Negan, this is clearly where we are positioned. So far, so effective.

Abraham’s death was first and done well, the jolly ginger giant meeting his end with characteristic belligerence as he stares defiantly up at Negan and delivers one last quip. As he went down he was knocked out of frame, and we were mercifully spared the gore as he had his brains bashed out.

But after Darryl could contain his rage no longer and leaped up to attack Negan, it’s poor Glenn who pays the price. And that is hard to watch. Receiving several blows to the head, his eye pops out and he kneels, bleeding and dying as he mumbles to Maggie “I’ll find you”. Negan lets him suffer, mocks him, and then puts him down too. For this kill the camera is positioned on the ground, and we see…every… damn…thing…

So here’s the thing: there is a difference between making a show about sadism, and making a show which is sadistic. I’ve got no problem with the themes in TWD being adult: it is, essentially, about the best and worst of humanity colliding, and what people do when there is no society left to externally regulate their actions. However with Glenn, the lingering and drawn out way in which his death was filmed stopped being simply about Negan’s depravity, and instead took several steps into exploitation territory. 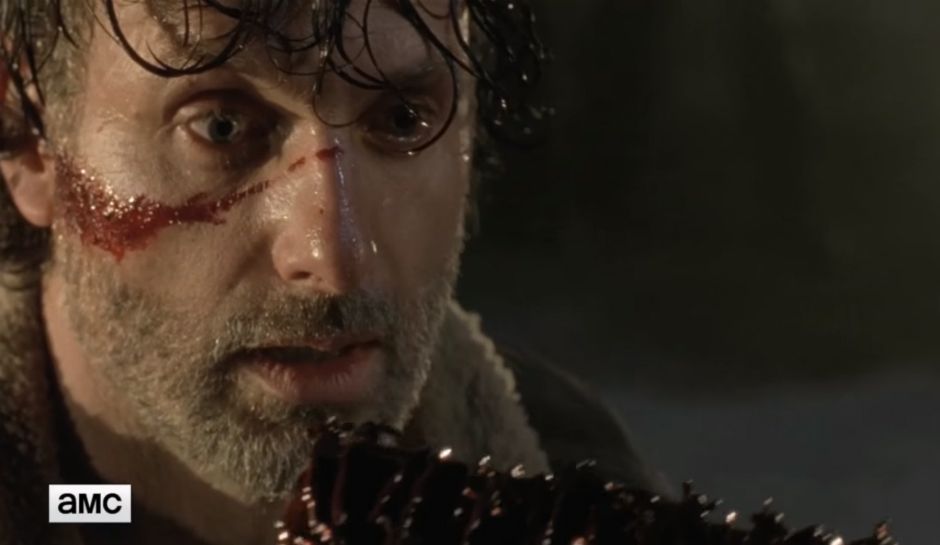 One of the key problems with this is that it is less powerful. I am sure the logic behind the decision to kill Glenn in such an explicit fashion was something like this: “Glenn is a lot of people’s favourite character. Let’s kill him off in an explicit way to show how evil Negan is”. But it’s a false equation. You don’t feel more for Glenn because of the explicit detail: you feel for him because of the character and his relationship with Maggie. Falling back on gore is a cheap trick, and for me was alienating and took me out of the moment. The scene would have been vastly more effective if it had been slightly re-framed or re-edited to leave more to the imagination (which cinema has shown us from time immemorial is more effective anyway).

This isn’t the first time TWD has been guilty of excess (though it is undoubtedly the worst). When Hershel Greene met his end in season 4 he took a samurai sword to the neck, crawling away as he bled out before The Governor set upon him and cut his head off. Same thing: by all means kill Hershel to further the plot and disorientate the characters, but make it drawn out and gruesome for no narrative value..? For me this is immature writing, and I hope future episodes of TWD rein this in and strive for genuine emotional punch rather than simple shock tactics.

On the positive side Jeffery Dean Morgan knocked it out of the park (sorry) as Negan. By turns charismatic and chatty before flipping to blood-soaked murderer, he evoked a convincing portrayal of an abuser: unpredictable; acting like his own actions are the fault of those he hurts; and creating an environment where Rick actually feels gratitude towards him when he gives him permission to not amputate Carl’s arm as a sign of obedience. All this rang psychologically true, and I am fascinated to see where this character goes next.

The Season 7 premiere was undoubtedly a sea change in TWD universe: a demarcation point which will have a before and after point in how this reverberates through its universe and the characters therein. Here’s just hoping that the show-runners use this opportunity well, and do not fall back on shock and gore because it’s the easy way to make the audience gasp.