Zombies have always been a thinking man’s monster. Whether it’s the social commentary of Romero’s Dead movies, or more recent offerings like  The Girl With All The Gifts, these shuffling ghouls are after your brain, in more ways than one.

Riding high on the current wave of zombie culture is AMC’s The Walking Dead. Based on the comic books by Robert Kirkman, it features Deputy Sheriff Rick Grimes (Andrew Lincoln), who awakes from a coma to discover that the world has descended into an undead apocalypse. Rick resolves to do everything he can to keep his family safe: both from the “Walkers”, but also from other groups of survivors… who may be even more dangerous.

It’s a great setup, and one with ample scope for tackling big ideas about human nature, morality and whether people can “come back” from the awful things they’ve done. With Season 7 starting next month, here is my top 10 moments in TWD so far, in chronological order. And it obviously goes without saying, but BEWARE: SPOILERS INSIDE.

If season 1 sets up the premise, the first truly jaw-dropping moment in TWD was the half-way mark of season 2. After Sophia runs away from a herd of Walkers, the group spend 7 episodes searching for her. Then when Glenn discovers that new allies the Greene family are keeping Walkers in their barn – under the misguided belief that they can be treated – Shane goes crazy, opening the barn to provoke the group to defend themselves with guns blazing. But as the smoke clears, a lone, small figure shuffles from the shadows and steps groaning into the light.

Carol falls to her knees in despair as she recognises her now zombified daughter, so it falls to Rick to step forward to do the decent thing and put Sophia down.There was not a dry eye in the house, and this event kick started Carol’s arc from fragile abuse survivor to something altogether more frightening (see no. 5 below).

TWD is always at its best when pitting characters against each other who hold different beliefs, and the first example of this was between Dale and Shane at the end of season 2. When a potentially hostile survivor from another group is taken prisoner, Dale implores the group to take the moral high ground and let him live. Shane meanwhile has fully embraced a survival-of-the-fittest approach and wants to put a bullet in the prisoner to secure their safety.

Distraught by the collapsing humanity of the group, Dale ignores every horror rule in the book and goes for a walk alone before being disemboweled by a rogue zombie. Despite the group coming to his aid it is all too late, and it’s left to Darryl to ease Dale’s passing. It’s a tragic moment of a beloved character, and not for the last time that the voice of moral reason within the group dies. 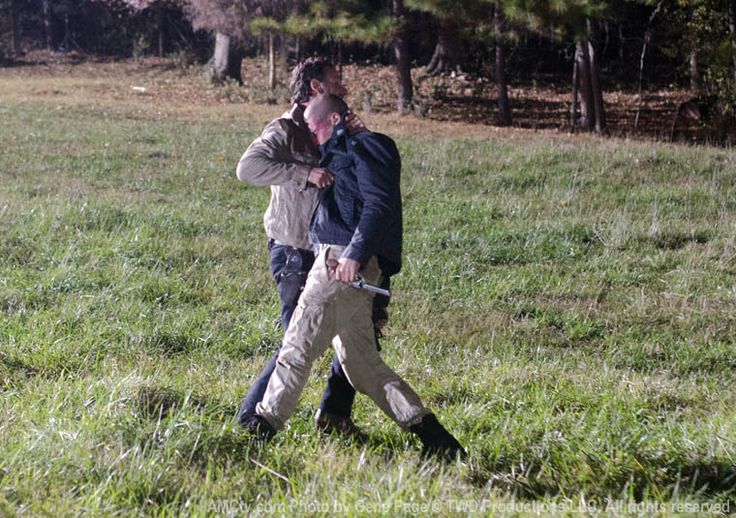 Rick and his best friend Shane had been butting heads for a long time. Not only did Shane and Lori sleep together when they believed Rick to be dead, but he continued to argue that Rick’s loyalty to the old world of law and order was outdated and putting his family at risk.

Following Dale’s death, things come to a head when Shane follows his Darwinian logic and decides that to protect Lori and Carl, Rick must die. He pulls a gun, but Rick  manages to talk him down… long enough to get close and stab his best friend to death first. Yikes.

Whilst season 3 is not without merit, for me it lacks the iconic moments elsewhere in TWD so we’ll skip forward to the mid-point break in season 4. Suffice to say that by now Hershel Greene has established himself as a father figure to all and a Dale-esque voice-of-conscience to Rick. So when local warlord The Governor comes looking for revenge it is particularly poignant that Hershel is the one who pays.

Kneeling in the dirt outside the group’s prison home, Hershel watches with a flicker of pride as Rick implores The Governor that he “can still come back” from the things he’s done and they can live together in peace (interestingly Morgan uses these exact same words to Rick in Season 6). The Governor considers this offer of redemption for a moment – apparently almost won over – before muttering “Liar” and hacking Hershel to death.

It’s one of the most upsetting scenes in TWD history: Hershel dies, the prison is breached, children shoot adults, baby Judith is apparently eaten and the group are scattered as they flee for their lives. “Don’t look back,” Rick tells Carl. Yeah, no kidding.

Perhaps the most infamous TWD episode and borderline unwatchable for parents, The Grove is one of many great moments which follow the prison breach in the second half of season 4. By now Carol is well-established as a changed woman after losing Sophia, and will not baulk at making tough decisions for what she perceives to be the greater good.

And decision don’t come any tougher than this. Hooking up with Tyreese, who is protecting Mika, Lizzie and baby Judith (who was not eaten after all – hurray!) it becomes clear that Lizzie does not see the world clearly. She’s convinced that Walkers are people too, and so when she is left alone she murders her sister Mika and is also about to kill Judith as well. Despite being something of a surrogate mother, Carol decides Lizzie is too dangerous to be around people and so takes her for a walk to look at some flowers… before putting a bullet in the back of her head. It’s like losing Sophia all over again. Of Mice and Men has got nothing on this. 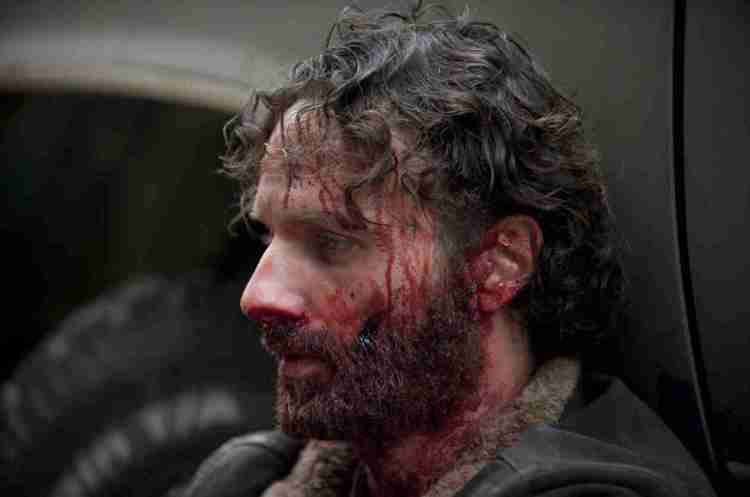 The season 4 finale is an absolute humdinger and accounts for moments 5 AND 6 on this list. By this point Rick is a broken man: the death of Hershel, the loss of the prison, the dispersal of the group, the perceived death of baby Judith (whom Rick is still unaware is being looked after by Tyreese and Carol) and now to cap it off he, Michone and Carl are set upon by a vagabond gang called the Claimers. Holding a gun to his head, gang leader Joe calmly informs Rick they are going to rape his son and Michone, and so Rick does what any father would do: bites the man’s throat out. With blood spraying over his face, the line between Walker and Survivor has never been more blurred.

So I might be being greedy here, but the entire Terminus arc from end of season 4 to the beginning of season 5 has too many iconic moments to chose just one. When the group is captured by a cannibalistic community and stored like fresh meat in a container Rick gravely intones that “They’re fucking with the wrong people”, and goes on to prove this by breaking out and massacring a path to freedom . Key too to this is Carol: drenched in blood and leading a Walker herd to break down Terminus’ walls, she has never been more dangerous.

However, perhaps the most haunting image comes following their escape. Having trapped a group of Terminus survivors lead by Gareth in a local church, Rick makes them kneel before him (mirroring his own near death experience by the trough in Terminus). Gareth is unarmed and begs for his life, but Rick has “made…a promise” and calmly hacks Gareth to death with a machete to save the bullets. Evoking real life atrocities such as the Rwandan genocide, this is perhaps the clearest moment where Rick crosses the line from being a good man doing bad things, into something far darker.

After surviving in the wilds for months, the group stumble across walled settlement Alexandria. Though initially plotting a hostile takeover, Rick manages to hold back and gives an impassioned plea to the Alexandrians that they can make it through together: flickers of the honourable man he once was shining through.

However things take a downward turn when local wife-beater Pete gate crashes the meeting, drunk and armed with a machete. He kills Reg before all, and after being restrained Rick publicly executes him… which is just the moment when old friend Morgan (another moral voice like Dale and Hershel) walks in. “Rick?” he asks disbelievingly, unable to grasp that the blood splattered man in front of him is the friend he once knew. Here perhaps more than ever are the two sides of Rick’s nature most clearly contrasted.

9. The Battle for Alexandria

Things continue to go badly for the group when one of the walls to Alexandria collapse in season 6, sending a horde of the undead flooding onto their streets. As Rick desperately tries to lead a way through, frightened kid Sam gets eaten, causing his mum (and Rick’s new girlfriend) Jessie to scream hysterically and meet the same fate. And if that wasn’t bad enough, Carl takes a stray bullet to the eye and drops down, seemingly dying.

After rushing his son to the infirmary, Rick goes catatonic in the corner, before taking all that rage and hate and stepping out into the zombie crowds to lay some serious axe down. Hacking his way through wave after wave of Walkers, the Alexandrians take courage from his leadership and join him to take their town back. It’s a heady mix of horror, tragedy and inspiring camaraderie, and defines the moment when they all became Rick’s people. 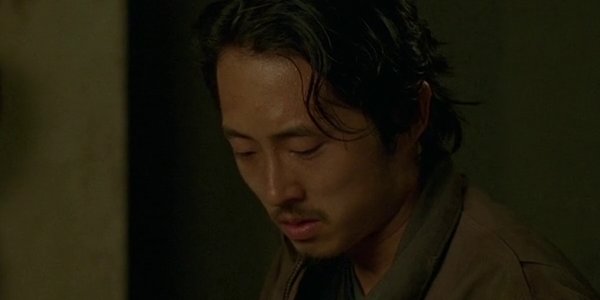 The last moment on this list is something altogether quieter and more heart-breaking. With local gang “The Saviors” marauding near Alexandria, Rick convinces the group to make a pre-emptive strike and kill them whilst they sleep. And whilst Rick is very used to such morally compromised decisions by now, other members of the group are not.

During the assault Glenn and Heath sneak into a darkened room where two “Saviors” are sleeping. With tears rolling down his face, Glenn makes his first human kill. And – here’s the kicker – as Heath steels himself to also commit murder Glenn intervenes, and does the next guy too. A rescuer by nature, Glenn saves Heath’s conscience at the cost of his own. 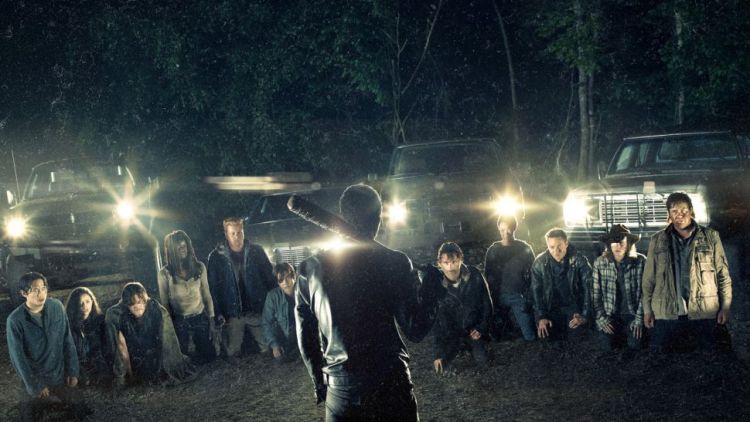 Season 6 of TWD finished with the group kneeling before “Savior” leader Negan, before he merrily bludgeons one of them to death (though which one, of course, is left for season 7). Though this moment didn’t make my top 10, it sums up a lot of why TWD is so powerful: it’s about a family facing horror head on. The real challenge though is whether they can face it without becoming a horror themselves. And that remains to be seen.