A word to the wise. Spoilers this way lie… 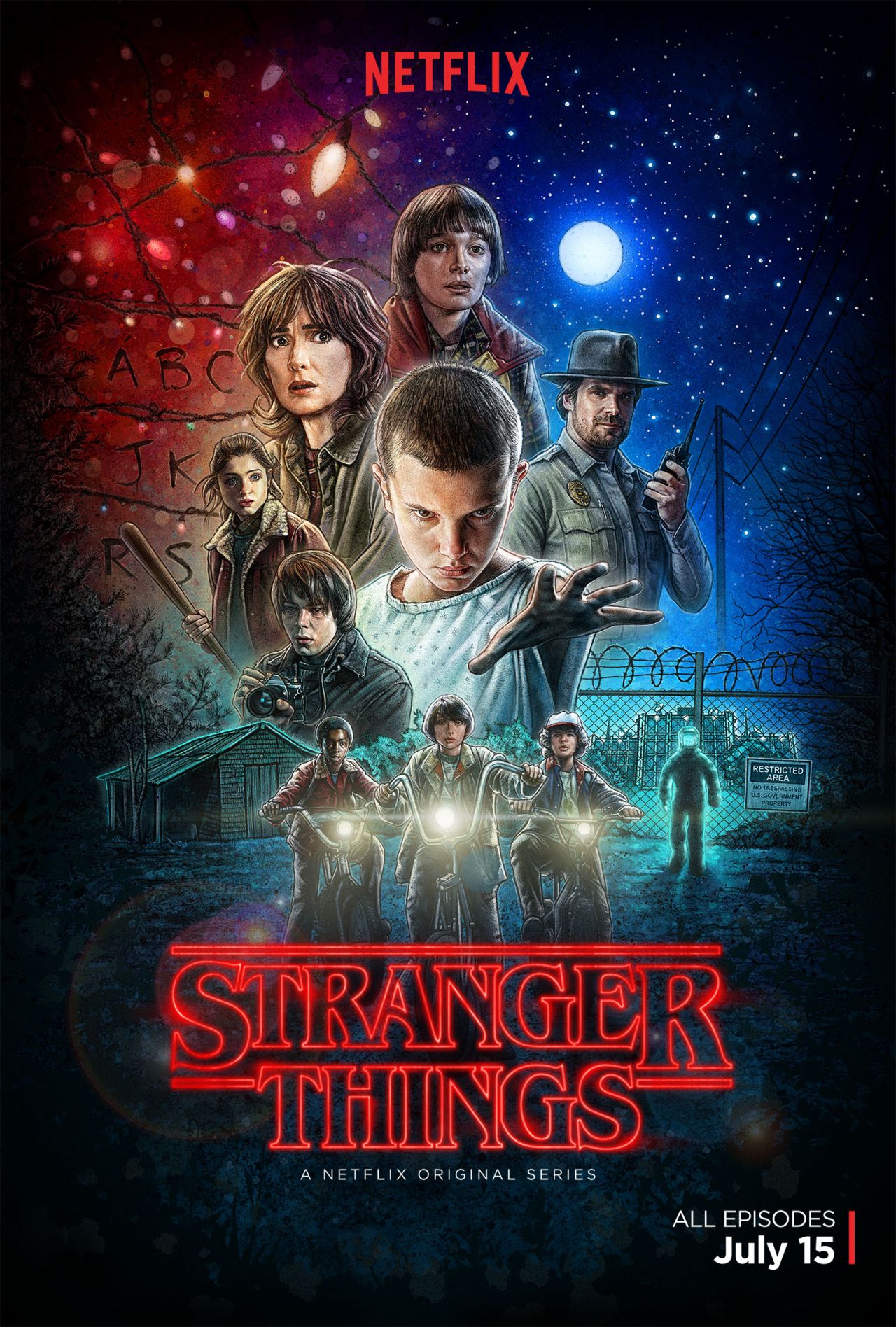 Indiana. 1983. Cycling home one night local boy Will Byers disappears, leaving the cops searching and his mother distraught. But when Will’s friends discover “El”, a young girl in the woods with supernatural powers, they realise she may be the key to helping them find their friend.

Man oh man, The Duffer Brothers sure do love the 80s. In fact, so deep is their affection for the decade’s pop-culture that you can barely watch a single scene of their Netflix mini-series without a reference to some iconic song, movie or game. Characters talk about The Empire Strikes Back and The Thing, play Dungeons and Dragons and dream of getting an Atari console for Christmas.

In a way, this shouldn’t be surprising. As 80s kids are today’s adults there is a strong nostalgia, both amongst audiences and film-makers, for the movies of our collective childhood. Films like Drive (2011), Guardians of the Galaxy (2014) and The Guest (2014), although not set in the 80s, draw heavily from that decade’s cinematic traditions, particularly in terms of aesthetic and soundtrack. I myself am a complete 80s geek, and as my wife will tell you I have an enthusiasm for the decade’s films which borders a little on the scary.

So locating Stranger Things within this trajectory, the series should be a solid gold win. However, one of its (numerous) problems is that this affection verges on the suffocating. 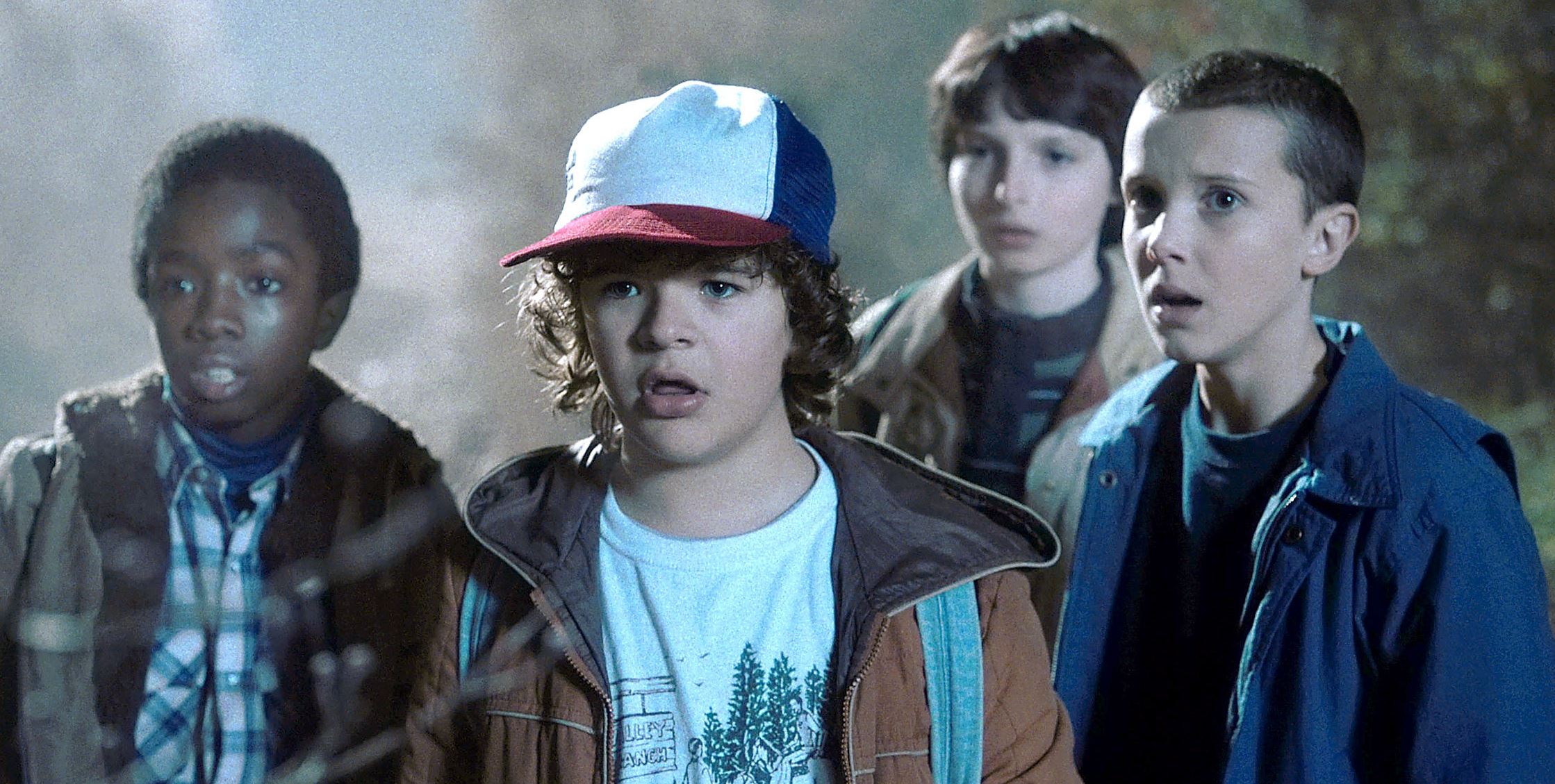 Firstly, ST doesn’t just happen in the 80s and name drop cultural references at an astonishing rate: it also rips story arcs right out of the films it revers. So you have a bunch of sweary pre-teen boys on a mission (Goonies; Stand by Me); a little person with special powers being pursued by Government forces (ET; Firestarter); and a child who supernaturally disappears before trying to communicate with his mum from “the other side” (Poltergeist). On top of this there are images from these films (kids on bikes chased by bad guys; the gang walking on train tracks through the woods) which re-enforce the sense that ST is not just an homage to the 80s, but a pastiche.

In fact, as time goes on the series becomes increasingly a cover versions mix-tape of the 80s’ greatest hits. And this is a major problem: it reminds you how wonderful those original films are without building on their legacy and breaking new ground.

Secondly, plot points are revealed too early, killing the suspense. For example, in the opening scene of Episode 1 there can be no doubt that Will Byers has been snatched by a monster because, you know, we see it happen. Similarly right from the outset we see inside the Government research facility of the Bad Men, so when our protagonists later break in we already have a fairly good idea of what to expect. And the creepy finale of The Upside Down? Forget about it: already been there in Episodes 3, 5 and 6. And so on and so on. As such The Duffer’s pretty much diffuse all tension by showing us too much too soon, lacking the rigorous story craft of Spielberg and Carpenter et al, who knew when to hint, and when to hold stuff back.

Lastly, because of the above issues, the story’s emotional punches often lack power. Sure, when Sheriff Hopper finally gets some flash-backs in the last episode it packs a wallop, but before this there is precious little heft. Since the tension has been diffused, and everything is a tribute to other (better) films, it’s a little difficult to connect with the characters or invest in their individual journeys.

Now, don’t get me wrong: there is much to enjoy here. Tonally the series is spot on, with an excellent grasp of cinematic language and a pitch-perfect soundtrack destined to become an essential download. Steve’s arc is pleasingly subversive of genre tropes. And there are some excellent performances, particularly the chemistry between El and Mike which is effortless and heartfelt. But overall, if it’s depth you’re looking for – of character, mystery, plot or wonder – then ST comes up short.

As Series 2 has already been announced, here’s hoping that the Duffer’s go deeper into the world they’ve set up, but that they tighten their plotting and move away from such a heavy reliance on the films that have inspired them. I don’t want to watch them remake 80s classics: I want to see them do something really great themselves.