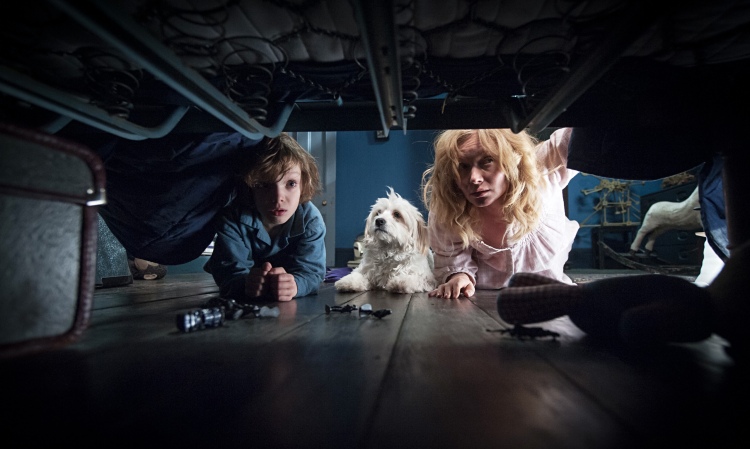 I’m not a big fan of supernatural horror movies. Although horror can be a great genre to explore ideas, I’m wary of anything which empowers fear in my life. Fear is, frankly, something I think we all need less of. And so for this reason I had avoided The Babadook until, that is, last week. A friend had encouraged me to check it out, and I realised that The Babadook isn’t about empowering fear, but overcoming it.

The film centers on single mum Amelia. It’s been seven years since her husband was killed in a car accident whilst driving her to the hospital to have their son, Noah. Since then she seems, on the surface at least, to have moved on… except that Noah’s birthday always reminds her of the tragedy. On top of this Noah is a “problem child” with violent fantasies of killing monsters. And so when he asks for a bed-time story about “Mister Babadook”- a pop-up book about a spectral creature attacking a family – you just know things are about to go from bad to worse.

Now, you’d be forgiven for thinking this sounds like just another “haunting” movie (Sinister, Insidious, Paranormal Activity, blah blah blah). And there is an element of that which is true: you can definitely watch the movie as a straight-out shocker, full of genre tropes. However that for all the things which go bump in the night, the film is really an extended metaphor about facing up to the reality of your own emotions.

You see, Amelia hasn’t really moved on from her husband’s death at all: she still has nightmares of the night he was killed and is clearly fragile from the outset. But she suppresses her grief and tries to act like a “normal person” (to her colleagues, her sister, herself). So when she reads “Mister Babadook”, and him screaming “LET ME IN!” at a woman lying in bed, he represents her tumultuous emotions which she is desperately trying to deny. In fact, denying isn’t working out too well for her: later in the book the Babadook warns her “The more you deny, the stronger I get” and this seems to be just the case. She keeps telling herself the supernatural happenings in her house are not real, but sister, that just ain’t the case.

Fairly quickly Amelia starts to loose her grip on reality . She’s not sleeping, she starts shouting at Noah and she’s worried she’ll hurt him or herself (the pop-up book prophesies she’ll kill them both). And to top it off, when she goes down to the basement – where her husbands belongings are still boxed up – Noah has hung up his dad’s clothes up on the wall. This is later mirrored when Amelia goes to the Police station and sees the Babadook’s cloak on a peg. Is the Babadook her husband? I’d say not – but rather the unresolved grief about his death.

In the finale, Amelia goes full-Jack Torrance as the Babadook possesses her and she chases Noah about the house before getting him by the throat. But he just strokes her face as she chokes him, repeating “I love you mummy”. This unconditional love causes an exorcism and Amelia vomits the Babadook out. You might think that’s the end, but then the creature snatches Noah and drags him upstairs. Amelia manages to grab him back and rebukes the Babadook – “You are trespassing in my house!”. The creature spreads it’s dark wings, before collapsing in a wheezing pile of clothes on the floor. And when Amelia takes it’s hat off, the Babadook runs screaming from the room and locks itself in their basement.

In the final scene we join mother and son a few days hence. The Babadook still lives in their basement, but when Amelia goes down to see it she can look it in the eye, and keep it under control.

It’s an incredibly powerful and cathartic denouement. Like the ending of Inside Out (which makes an interesting companion piece) the message is clear: being emotionally healthy means facing up honestly to everything that’s going on in your life. Suppressing feelings because they’re painful or scary doesn’t make them go away: it makes them stronger. And if we don’t deal with them ourselves, those unresolved feelings are going to affect our children too.

That might all sound a bit heavy and burdensome, but it’s actually incredibly liberating. In the midst of darkness, there is hope. And victory belongs to the brave souls who – empowered with unconditional love – are willing to face their fears and by doing so, overcome them.