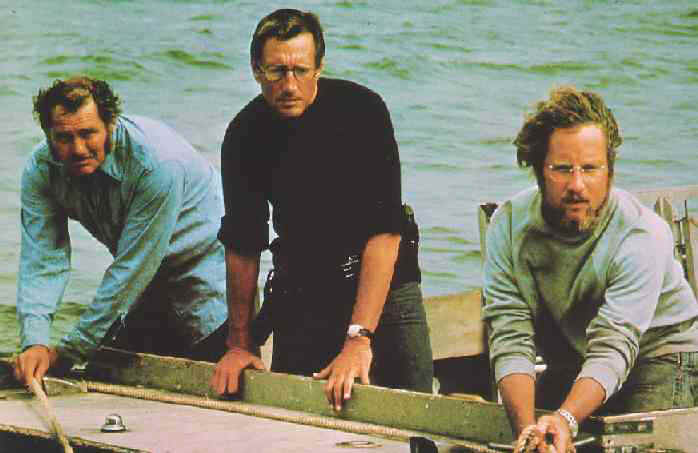 Another film that was important to me growing up was Steven Spielberg’s “Jaws” (1975). It’s largely felt to be the first blockbuster ever made and – although 40 years old this summer – has yet to lose its power. Although the film is known for its constant suspense, shock surprises and the fear-of-swimming it gave so many people, I think one of the most powerful things about “Jaws” is what it has to say about men.

Spielberg has a well-established history of exploring male identity in his movies. Although he’s famous for making both blockbusters (Jaws, Indiana Jones, Jurassic Park) and more serious award-winners (Schindler’s List, Saving Private Ryan, Lincoln), across pretty much all of them male identity is a key theme.

Take “ET” (1982) for example, a film informed by Spielberg’s own experience as a child of his parent’s divorce. Whilst on a surface it’s about an alien befriending a lonely boy, it’s really about the longing for an absent father (Elliott’s dad is no where to be seen in the movie, and don’t forget that the film ends with government man Keys now alongside Elliot’s mum: symbolically ET has brought a father home). Similarly “Jurassic Park” (1993) might be about a dinosaur theme park, but it’s also about Dr Grant’s journey into adoptive fatherhood as he goes from disliking the very idea of children to protecting Tim and Lex with a fierce paternal strength. Sure, these movies are also about childhood itself (another key Spielbergian trope), but the theme of male identity looms large in both, particularly as fathers. 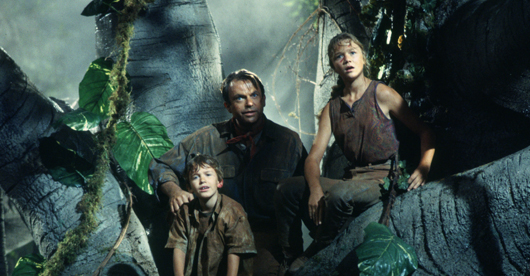 What’s interesting about “Jaws” is that it takes this idea of male identity and expands on it, exploring it both in and outside the context of the family. With this in mind, it’s worth looking at the structure of the movie.

“Jaws” broadly breaks into two halves. The first half sees a great white shark eat it’s way through a buffet bar of Amity Island holiday goers (including – in a single scene – a dog and a small boy: now that’s not something you see in most family movies these days!). The authorities of Amity eventually bow to pressure to deal with the threat and commission shark hunter Quint (Robert Shaw) to kill the beast, along with oceanographer Hooper (Richard Dreyfuss) and landlubber lawman Sheriff Brody (Roy Schneider). The second half of the movie sees this odd-trio of men out in deep water, hunting the shark and in conflict with each other.

In the first half of the movie we see Brody struggling to adjust to life in Amity after relocating from NYC, a change made all the worse by the shark attacks. His character is established in a set of vignettes: he feels sick to his stomach as he watches “that little Kinter boy” get eaten alive, and then goes home in a wonderful scene where his own young son copies his worried facial expressions. As such Brody is quickly established as something of an archetype – the protector father.

For Brody, and Amity as a whole, the crisis point comes when the shark strikes again, killing another man and almost eating Brody’s own son Mike. At this point Brody rises above the political stalling of Amity’s mayor and takes to open water with Quint and Hooper. He is the audience’s protagonist, full of fatherly anger that draws a line in the sand and decisively goes after the shark.

From here on out the rest of the film features an exclusively all-male cast, and becomes less about fathers and more about different elements of the male-psyche. If Brody is a father/protector, then Hooper is the youthful academic: a wealthy, younger man driven by his passion for sea life, taking a more detached and scientific view (“What we are dealing with here is a perfect engine, an eating machine”). And grizzled old sea dog Quint? Full of an easy, almost psychotic machismo, he sings and mutters and sails the boat out deeper and deeper into the shark’s territory like a Cpt. Ahab for hire. Indeed, in the same way Moby Dick was about a ship of men lead by a maniac bent on revenge, Quint is a survivor of the USS Indianapolis (a real life tragedy where around 700 US servicemen were eaten by sharks). The scene where he recounts that story is one of the film’s most iconic, where this diverse group of men bond over booze and comparing scars. I think it holds a poignancy not only for the brilliant writing and performances, but it’s one of the few moments when all three men are at peace with each other: these different elements of male identity held together in perfect tension.

One of the great strengths of Spielberg’s movie is its ability to withhold judgement from these men. At various times you might identify with Brody, then Hooper, then Quint, and then back again, and when it all ends it’s difficult to say who was right or who, even, was heroic. It’s almost like Spielberg himself has put these men adrift – out to sea without women – in order to wrangle with his own sense of masculinity and what it means to be a man. That, and to hunt a 25 foot great white shark.